The original rainbow flag was conceived with 8 stripes. Gilbert Baker assigned specific meaning to each of the colors as seen in the diagram on this page.

But the Rainbow Flag that has been used predominantly through history since has only 6 colors.  This modification had nothing to do with the flag’s meaning, but came about out of necessity due to fabric supply and logistics.

After the assassination of gay San Francisco City Supervisor Harvey Milk on November 27, 1978, demand for the rainbow flag greatly increased.  Unfortunately, hot-pink fabric became increasingly unavailable. To meet the demand, the Paramount Flag Company, of which Gilbert Baker was an employee, began selling a version of the flag using stock rainbow fabric with seven stripes.  The flags flew off the shelves of its retail store on the southwest corner of Polk and Post.

By 1979, circumstances made it necessary to modify the flag again.  When hung vertically from the lamp posts of San Francisco’s Market Street, the center stripe was obscured by the post itself. Changing the flag design to one with an even number of stripes was the easiest way to rectify this, so the turquoise stripe was dropped, which resulted in much celebrated six stripe version of the flag — red, orange, yellow, green, blue, and violet 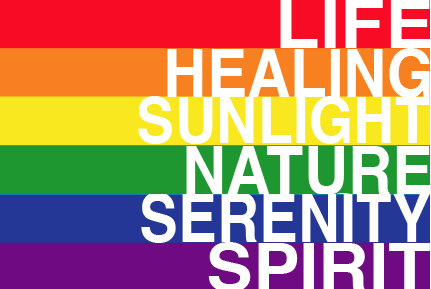